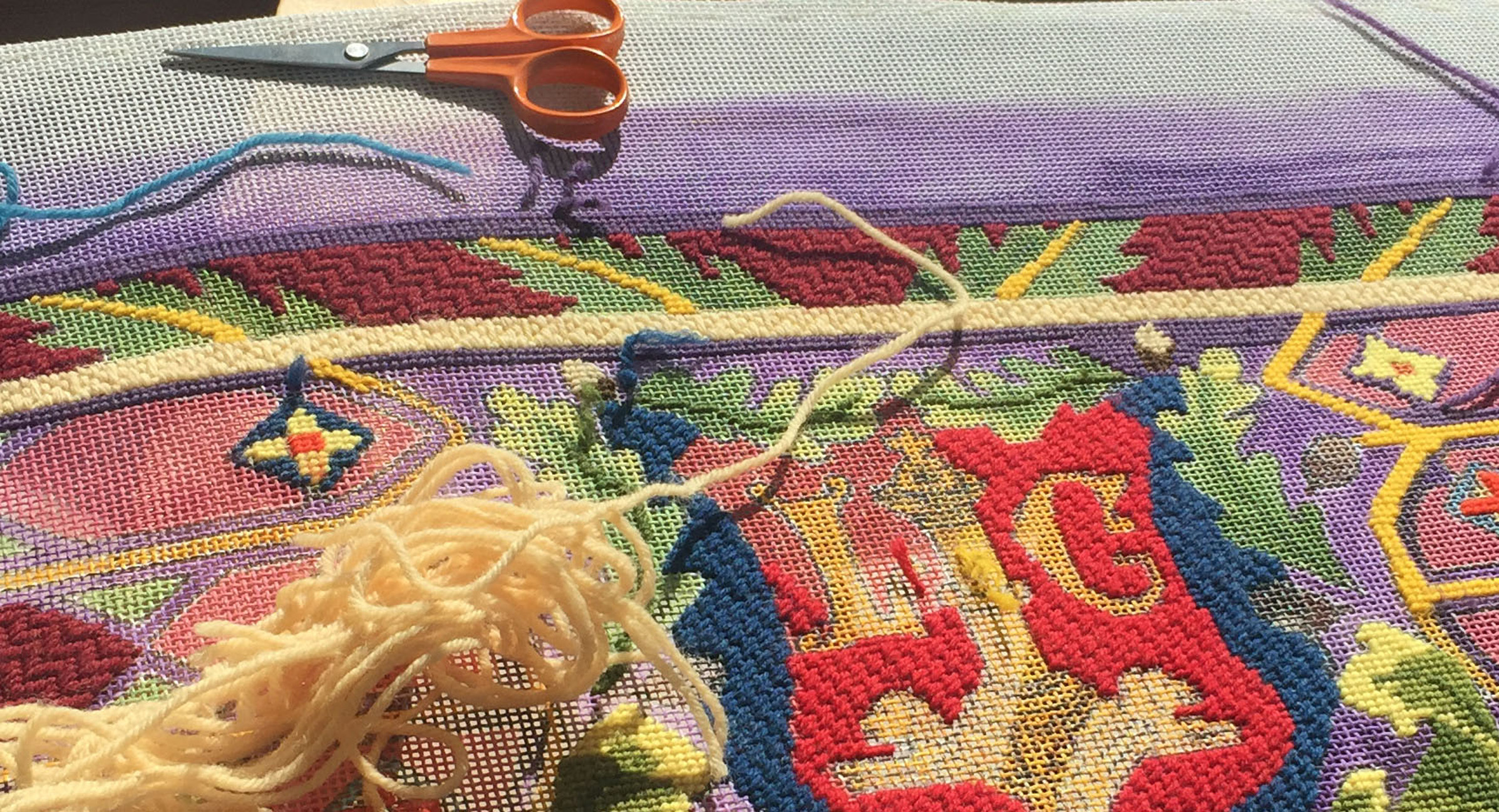 From the conservation of books to projects in historic parks and gardens, our Heritage Volunteers are busy all over the UK helping to conserve and protect the nation’s heritage. They work in many different roles including book conservators, stewards and archivists in heritage sites.

If heritage is your passion and you want to make a difference, this might be the role for you. Working closely with the curators and volunteering committee you will get to spend time on these wonderful projects as part of the team.

To register as a Heritage Volunteer, contact our membership team today.

Running over a number of years is a project of canvas work kneelers for a Stonyhurst College Chapel.

The Stonyhurst Association provide funding for this extensive project. Volunteers from four different societies are working separately on canvas designs; sewing groups gather in a member’s home to create these masterpieces – works of art which will decorate kneelers in the Sodality Chapel in Stonyhurst College. 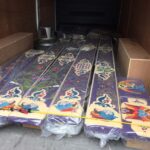 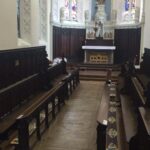 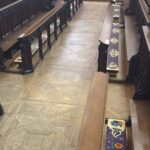 On Thursday 13 October 2016, 45 people gathered in the Sodality Chapel for a blessing, by Father John Twist, of newly embroidered kneelers.
It had all begun eight years ago in 2009 when the Stonyhurst Association agreed to commission new kneelers. You may remember that they had funded the restoration of the chapel a few years earlier and this could be seen as a final embellishment.
The National Association of Decorative and Fine Arts, Birmingham volunteer sewers, led by Mary Price, found a designer from the Royal School of Needlework

Helen McCook and Mary Price visited the College where Jan Graffius introduced them to the Sodality Chapel, a collection of vestments and books of hours, which formed the basis for Helen’s designs. (Helen also worked on the Duchess of Cambridge’s wedding dress!) She painted the designs for the twelve long kneelers to fit the choir style pews. She taught the Birmingham sewers five types of stitch to be used and in 2010 three more Lancashire groups joined; Ribble and Craven, South Lakes and Fylde.

The designs are painted on to canvas that is stretched on a long cradle. This enables sewers to work on both sides of the canvas at the same time and the sewing has been under way for seven years! All the volunteers give of their time freely and eight kneelers are complete as can be seen from the photo of them loaded into a van for delivery. The new bases and upholstery were carried out in Birmingham. There still remain four, each 10ft. long to complete which we expect within the next couple of years.

Many votes of thanks were given to the sewers, including from the Headmaster who joined us, for this wonderful gift. In his homily Fr. John Twist told us of Jacob’s dream and the stone on which he rested his head. He said these kneelers are like the stone, they both remind us that this is the Lord’s House.

Our Diarists - Diaries of James Hargreaves

The Heritage Volunteer Project on the diaries from 1894 – 1918 of Backburn business man and philanthropist James Hargreaves has now come to an end. Thanks to the hard work of a team of 14 volunteers who painstakingly transcribed the 23 hand written diaries, subsequently a CD-ROM of the whole collection was produced. The project was funded partially by our Arts Society and by a memeber of the Hargreaves family. Congratulations to all involved.

The possibility of producing a printed copy of the diaries is also under consideration providing there is sufficient interest to help with the funding of such a venture.

James Hargreaves, a merchant who lived in Blackburn, took to writing diaries of important and personal events around the turn of the 19th Century. They reveal, with compelling immediacy, his reactions to the Titanic and the Great War!

Heritage Volunteers are working on cataloguing an historic set of early local Photographs, known as the Edmondson Buck collection. This is a very important part of this area’s heritage. There is also a plan to work on the records of the former Blackburn Orphanage.

Become a member of the society 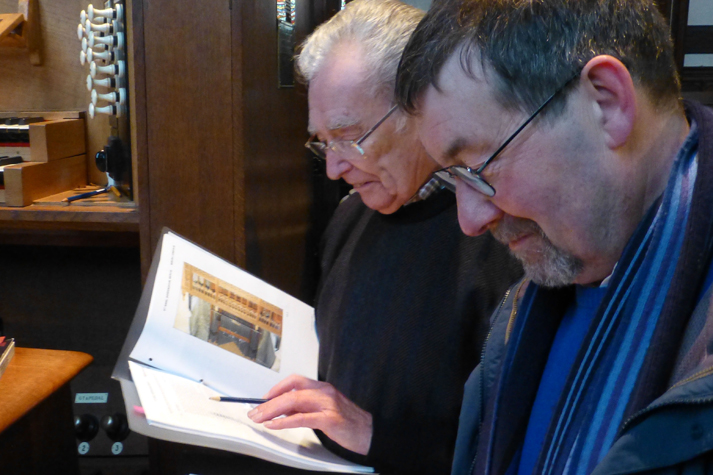 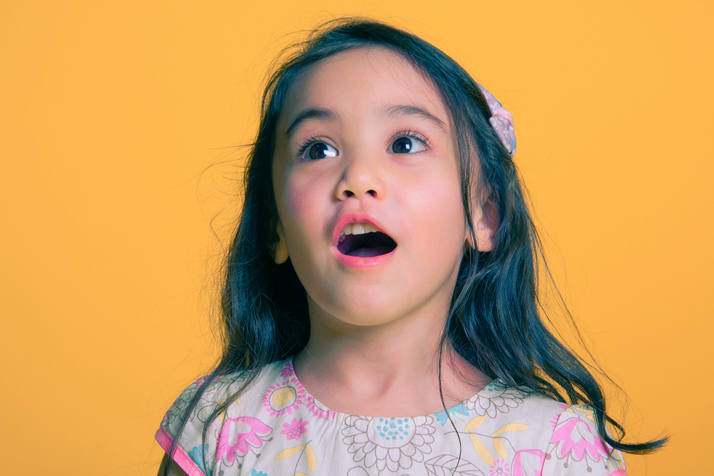 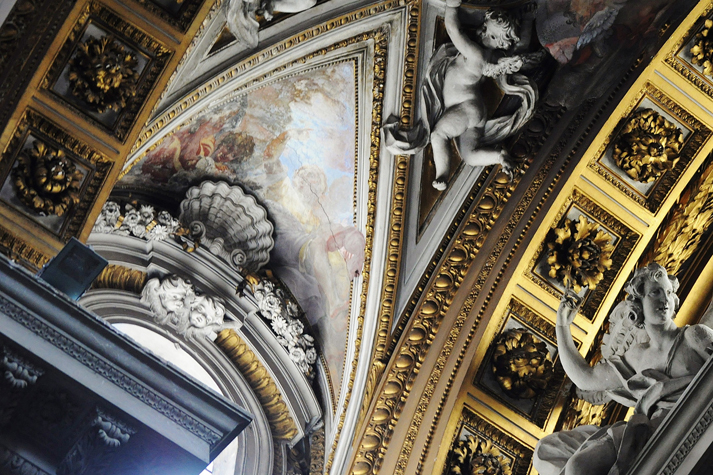